Colors! for the Nintendo Switch: Exclusive Interview with Jens Andersson 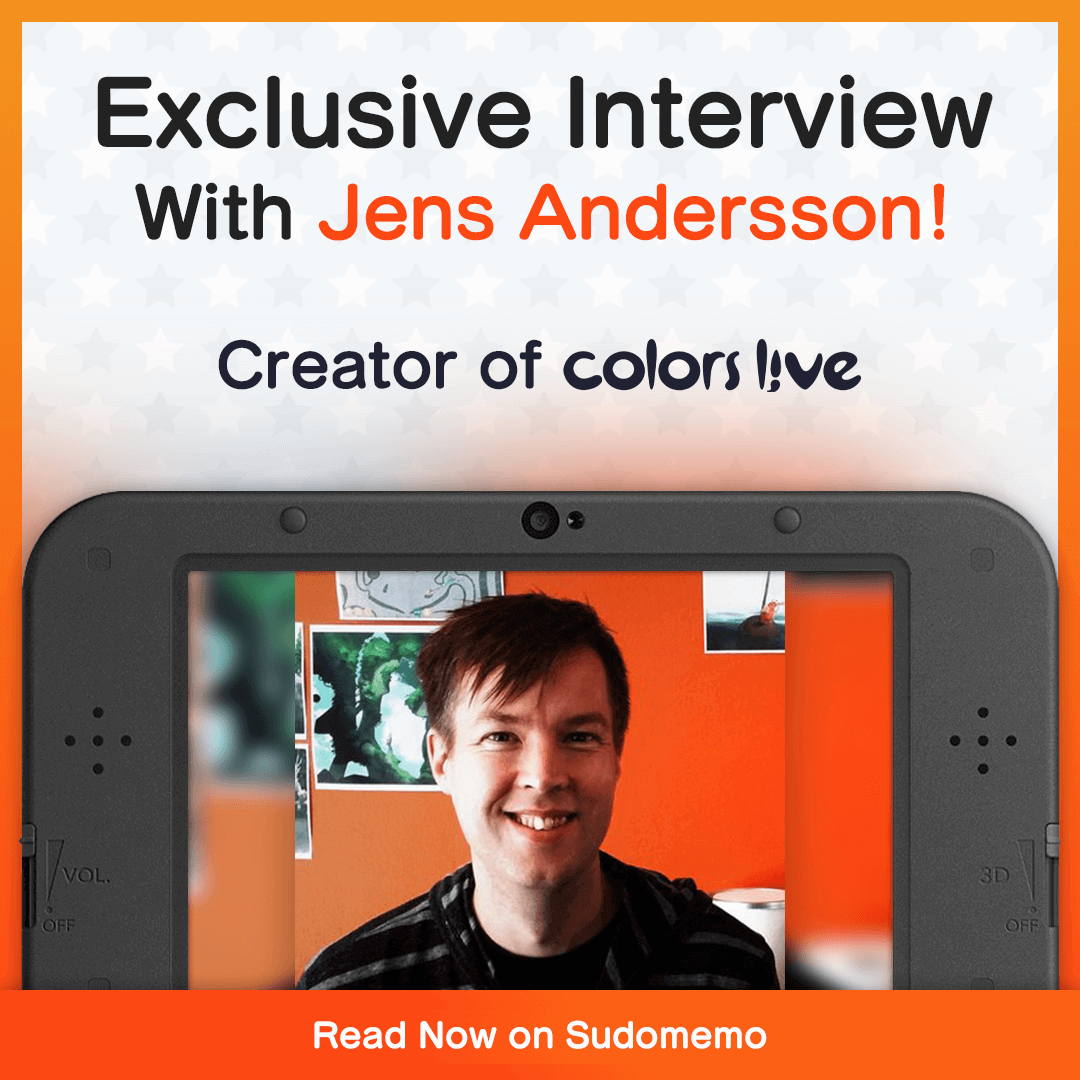 Hey Flipnote fans! Today we have a special guest with us, who's giving us exclusive new look into the release of Colors for Nintendo Switch and the Colors! SonarPen: Jens Andersson!

Many of you may be familiar with Colors! 3D, the hit painting app for the Nintendo 3DS which is soon to come to the Nintendo Switch. How will it work with the Switch, and what's the history behind the app and community? Read on to find out more.

Tell us about your early experience with art and programming and game design. What were some of your formative experiences?

I’ve been using computers my whole life, so in my case, ever since some of the first PCs arrived. I’ve always been fascinated with what you can create with them, but mostly the video-game aspect of it – where tech, sound/music and story come together. I spent most of my youth playing videogames on the C64 and the Amiga. Some of the videogames I played then still serves as a great inspiration for everything I do.

Professionally, I’ve been making games since 1998 and started off as a founding member of AAA studio Starbreeze, where I worked on games like Chronicles of Riddick and The Darkness. I also did some work at legendary studio LucasArts. In 2010, I wanted to build something on my own and set up my company Collecting Smiles in San Francisco. Nowadays I run two small studios in Stockholm: Collecting Smiles and Villa Gorilla. My last project was through Villa Gorilla where we made the game Yoku’s Island Express. It was released in 2018 and did fantastically well, including winning a BAFTA for Best Debut.

For those of us who aren't familiar, can you tell us about what Colors! is and how it works in its present form?

Colors! is a powerful and fun painting app with gaming elements. The first version was for Nintendo DS – where I found a way to get pressure sensitivity out of the screen. I built a small painting app around that which became super-popular.

Over the years, I’ve kept building on it, and together with some awesome people we managed to turn it into a proper Nintendo licensed product with Colors! 3D and create an amazing community and online gallery around it.

Our new project is Colors Live, which is the third generation of Colors. We just announced it on Kickstarter, and it’s coming to Nintendo Switch along with the Colors SonarPen, which is a pressure-sensitive pen.

Colors! started as a free homebrew application for the Nintendo DS. What gave you the idea, and what was involved in bringing it to life?

I initially worked on Colors! for homebrew DS back in 2007. At the time, I was working at the AAA game-studio Starbreeze. A good friend of mine there was a fantastic concept artist Mattias Snygg (http://mattiassnygg.com) and he taught me a very simple technique he used for painting on a Wacom-tablet using only a single brush and the eye-dropper tool.

At the same time, I became curious about homebrew for the DS. It was pretty much the first time it was possible to do programming for a competent handheld device, so I became interested in the new possibilities with that. Browsing the homebrew-forums, I found mentions about an unofficial feature of being able to read out pressure sensitivity from the touchscreen and I was curious in how well it worked. Doing a simple painting app felt like a nice experiment, and I wanted to replicate the painting process that Mattias had taught me. After releasing the first prototype, I was really surprised by the great interest in what I was doing. It was a really fun project, and it was especially motivating to work directly with the people who used it, something I was not used to from my work in the games-industry.

At this point, I started looking into if this could be a commercial product and I contacted Nintendo for the first time. The response I got was initially encouraging, but after a few back-and-forth I suddenly got a “Sorry, we won’t be able to continue talking about this and we can’t tell you why”. I’m still not sure why, but my guess is that they had had the discussion internally and decided that the homebrew connection was too complicated for them. It could also be because they had started working on something competing on their own, perhaps what turned out to be Art Academy.

How did Colors transition into being an official app on other platforms, and what core concepts did you set out to implement when you brought it to the 3DS with Colors! 3D? What challenges did you face with bringing it to a wider audience?

I kept working on Colors! as a hobby project and moved to San Francisco to work at LucasArts. However, after a little bit less than 2 years I decided to leave and fully commit to the idea of being an independent developer and I set up my studio Collecting Smiles there. The 3DS was just announced with the eShop being a big feature, and I decided to make another attempt at getting past the gates of Nintendo.

This time around I leveraged my contacts in the games industry to help me out. A friend introduced me to a licensed developer that had done lots of work for DS and was already working on a few 3DS titles. Generously, they invited me to sit at their office to develop a prototype for Colors! 3D. Once I had the prototype, they introduced me to the right people at Nintendo who liked what they saw. At that point we revisited the issue with the history of homebrew, but after some discussion they let me know that it wouldn’t be a problem as long as I didn’t host homebrew myself anymore.

Colors! 3D ended up being both a critical and commercial success and it’s still the #10 top rated game on the 3DS according to Metacritic, which is really amazing.

What observations have you made about how the Colors! community has grown and changed over time?

That’s a great question. Initially, when Colors was available for homebrew on Nintendo DS, it was almost exclusively early-adopter type people with good technical knowledge, and many had experience with a Wacom tablet. Since this was before smartphones, Colors! was one of the first ways to get a competent portable digital sketchbook. This meant we had super talented concept artists creating these amazing works and uploading it to the gallery.

Then, when we released Colors! 3D, a completely new category of people showed up. People who were just as interested in the social aspects and many times their first experience with digital painting. It became a younger demographic that did a lot of anime and fanart. And they seemed to love Colors! because it was very accessible and easy to get started with. With Colors Live, we are trying to combine both userbases. We want to provide a more powerful painting experience, while still retaining the accessibility that I think is so important. I want to see users new to painting and professional artists alike use Colors Live as their preferred tool.

Tell us the story about Colors! for the Nintendo Switch and the story behind the touch-sensitive pen, which you're calling the Colors SonarPen.

When the Nintendo Switch was released, I got a lot of requests to bring Colors!/Colors! 3D over to it. The Switch is a fantastic device, and since we had such great success with Colors! 3D on 3DS, if felt like a no-brainer for many people to bring Colors over to it. However, I didn’t really want to do it unless I could make a better version than Colors! 3D. Without a stylus, I would have to rely on finger-painting which is not something I think is very fun.

Then, a little bit more than a year ago, an inventor friend of mine in Hong Kong contacted me, asking if I could integrate a new stylus he was developing into the iOS/Android version of Colors!. and when I saw what he was working on, I thought it was an ingenious idea and realized that this would be perfect for the Switch as well.

Colors! is available on smartphones and tablets as well, but the big Colors community was always on Nintendo devices. Part of the reason for this is that the Nintendo devices has physical buttons. For a really streamlined painting workflow, having real buttons is great. Currently, there isn’t really anything on the Switch for digital painting, so I think it’s the perfect space for us to be.

Do you have any plans to introduce community education programs, such as tutorials about basic art principles, or information about different art styles?

I would like to, and it would fit with the goals I have with Colors Live, so it’s a matter of priorities. Colors Live is already trying to do that quite a bit by combining powerful painting, a social network and gaming elements. I’ve been considering how to be able to enable the community to create tutorial as such, but I still haven’t found the perfect idea for it. The playback feature, which always have been core to Colors, does a good job of this already, and many people in the community already uses that to create instructional videos.

What tips do you have for new artists who are just getting started?

I’m not much of an artist myself, but I’ve worked with tons of amazing ones. Their advice is always: paint, paint, and paint. Block out some time every day – it doesn’t have to be much – and create something new. Don’t get bogged down in the details – just get into the habit of creating something new every day.

And on the other side of the coin, how about tips for aspiring game designers and developers?

My advice here is very similar – just find a way to create things. Find other people who you can collaborate with to create things. Today, there are great schools where you can learn how to be a game developer, but in my opinion the best schools does something really basic: Most of their time is spent letting their students form groups and just do projects. And while it’s easier to make that happen in a school setting, you can totally start doing that on your own.

This interview will be read by many people familiar with Flipnote Studio, Flipnote Hatena, and Sudomemo. What memories, inspirations, and experiences have you had personally with Flipnote?

I’m embarrassed to say that I haven’t used Flipnote that much. As I mentioned, I’m more of a programmer than an artist, and I struggle with creating art. Perhaps that’s why I focus so much on the first-time user experience :) But even though I haven’t created much in it, I think it’s a fantastic little tool with a lot of great design-ideas. I remember being inspired to create my own animation software when I played around with it.

If everything goes according to schedule, when will Colors! for the Nintendo Switch and the Colors SonarPen be released, and what pricing will they have?

We want the Colors SonarPen to be shipped out to everyone in time for the eShop release of Colors Live. In these strange times it’s quite hard to predict exactly when that will be, but we are planning for a summer release.

We haven’t yet nailed down final pricing, but on the Kickstarter, we are selling Colors Live + Colors SonarPen for $39 (plus shipping). * * *

We'd like to thank Jens from Colors for his time and encourage you to take part in our Joint Weekly Topic this week, which members of both Sudomemo and Colors! can take part in.

Contest: May 31st, 2020: Colors! Live and Sudomemo team up for a special competition!

From all of us at Team Sudomemo and the Colors! Team: Happy Flipnoting! Happy Painting!